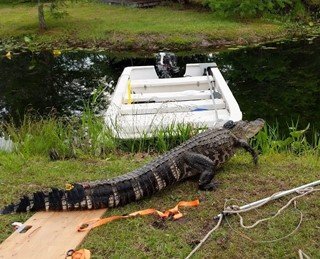 Click here to learn more about Johnny, see photos, and see where he’s been!

Description: Johnny is an adult male American alligator living in the Okefenokee Swamp. He was the first male to be integrated into our satellite tagging study. Johnny’s home range has proven to be much larger than any of the females, sometimes moving several miles in one day. This includes a long multiple-mile journey to the south of the park to an area we have not yet tracked another alligator. To this day, we still are unsure of the route he traveled as there are no visible paths, or at least none that humans can travel. Johnny was first caught and measured on 18 August 2018. By June 2019, he had grown 4 inches! Johnny is an especially good-looking alligator, having maintained his juvenile stripes and yellow coloration into adulthood. His namesake was a boat guide and director of maintenance at the Okefenokee Swamp Park for over 30 years. He had a passion for the swamp and was also known as the official chef of swamp cuisine. Sadly Mr. Johnny Hickox passed away in February 2019 at the age of 94. You can read his obituary by clicking on the following link. Obituary | Johnny Hickox of Waycross, Georgia | Miles-Odum Funeral Home and Crematory 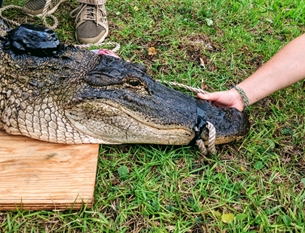 This map shows Johnny’s movements during the year (June 2019-June 2020) that he had a satellite tag attached to him. Male alligators tend to have larger ranges than female alligators. Johnny’s satellite data shows this very well as he frequently made moves of multiple miles and visited areas that we have yet to see another alligator go to. While he ventured all over the two areas, he seemed to frequent the most was the front of the park and back in green river.

In this map, Johnny ventures out into an area of the swamp that we have never seen another alligator tagged alligator visit. We have yet to figure out the path he used to get out there.

This map shows Johnny’s movements in the winter of 2019. Johnny does not move much and periodically his line disappears all together as he enters periods of brumation when the weather grows cold. 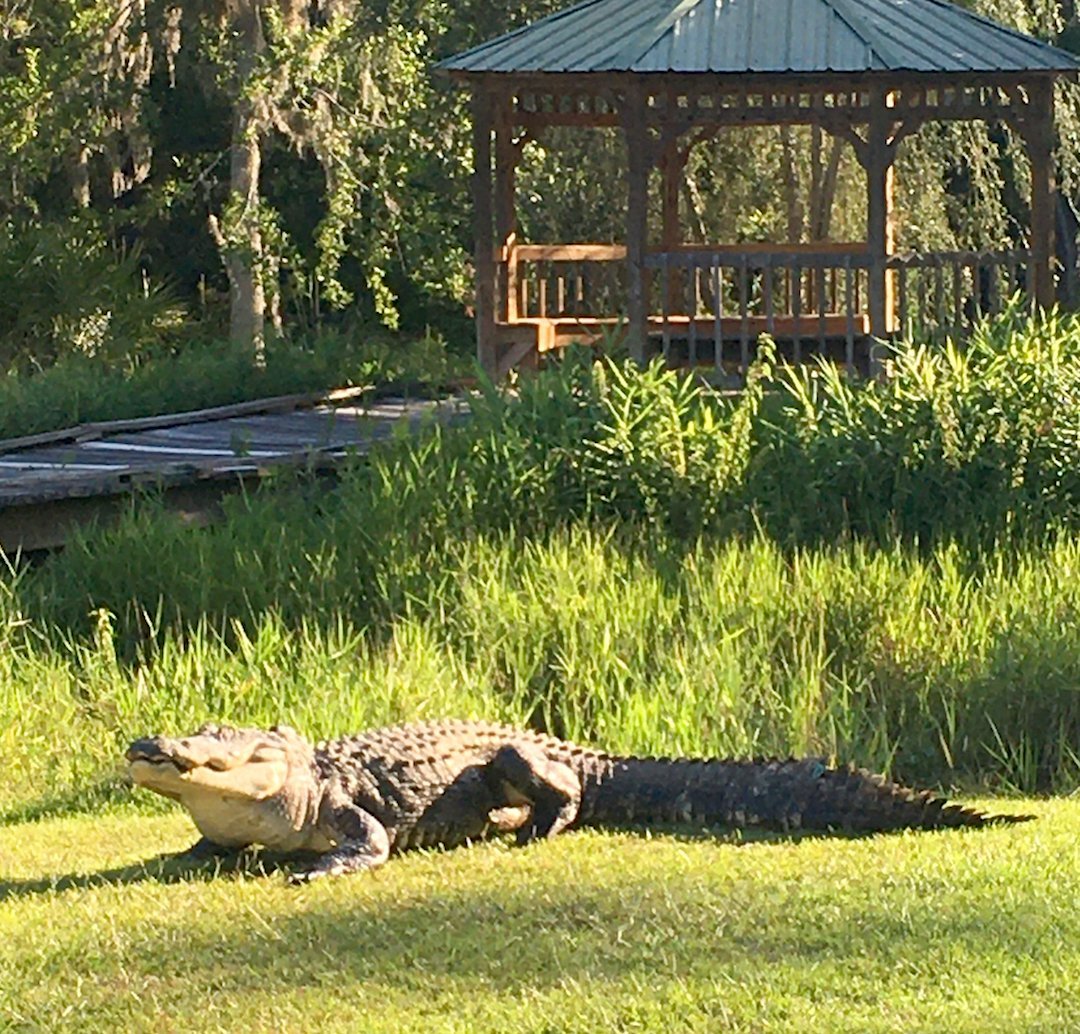 Click here to learn more about Okefenokee Joe, see photos, and see where he’s been!

Description: Okefenokee Joe was a large adult male American alligator, and he was the largest alligator to be integrated into the satellite tag study. Okefenokee Joe was an old alligator when he was tagged, evidenced by his worn-down scutes and cloudy eyes. An alligator of his size would have been in the running for the status of dominant male in his day, and we believe he was for a period following Crazy’s reign. We suspect that his old age and poor vision hindered his ability to compete with younger alligators when we started tracking him and it appears he had lost the title to Obadiah in the spring of 2021. Oke Joe still had a very wide home range and traveled throughout the entire park and into the refuge. He even traveled almost 2 miles in 12 hours! That being said, he did not seem to make these trips as often as he may once have. He seemed to spend a month or two in a small area, and then move a mile or two, and then spend another month or two in another small area. In August of 2021, we recovered Okefenokee Joe’s tag with the bare osteoderms still attached. Several other bones were found indicating that Okefenokee Joe had passed away. We suspect he passed away around the time of his last GPS transmission, July 20th, 2021. Okefenokee Joe got his name from Dick Flood (aka Okefenokee Joe) a singer, songwriter, entertainer, and environmentalist. He lived in the swamp for years and studied the animals that lived there, still teaching all who would listen about the beauty and importance of the swamp. To learn more about Dick Flood click on the link. Okefenokee Joe/Dick Flood – Who is Okefenokee Joe? 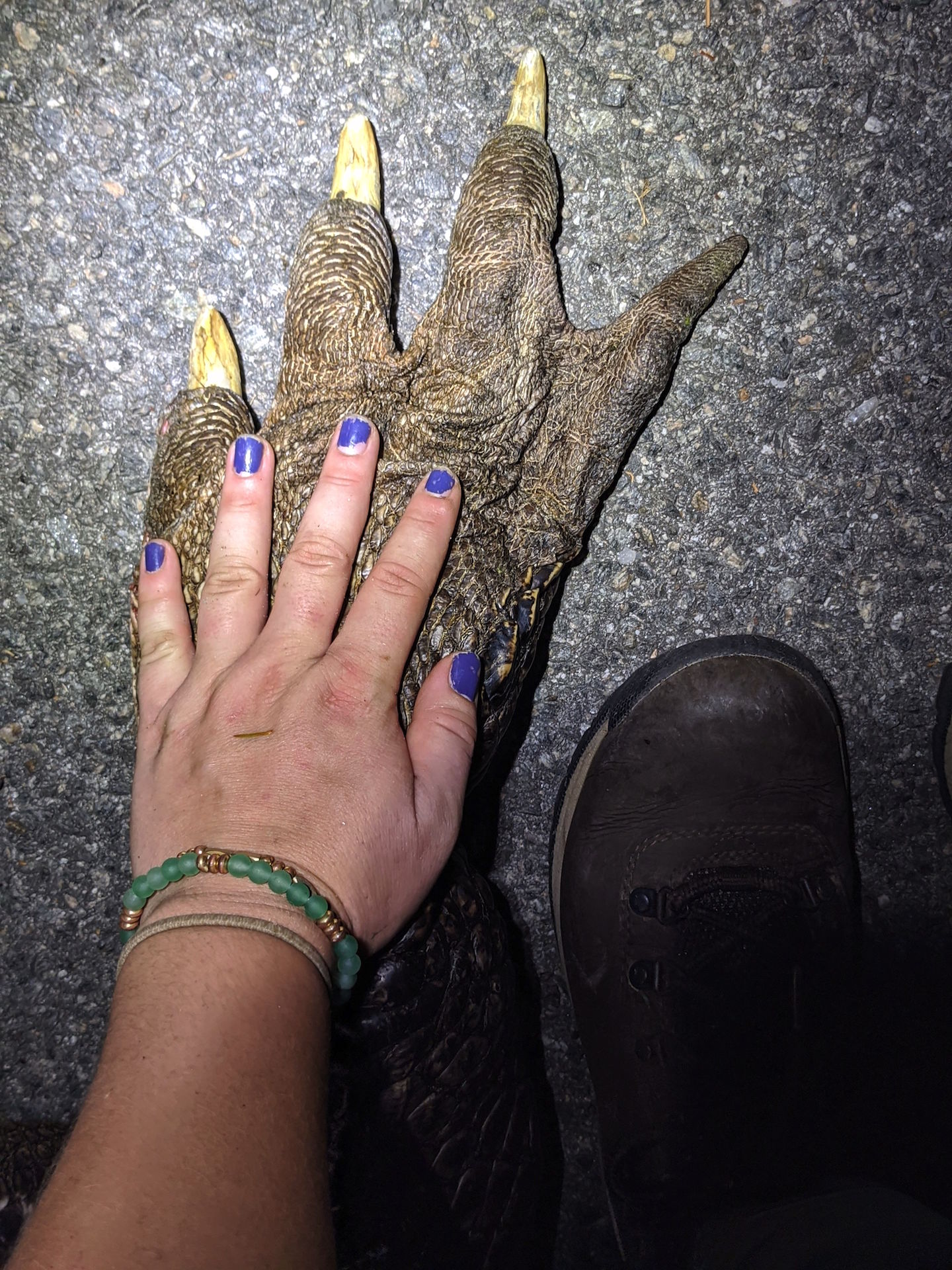 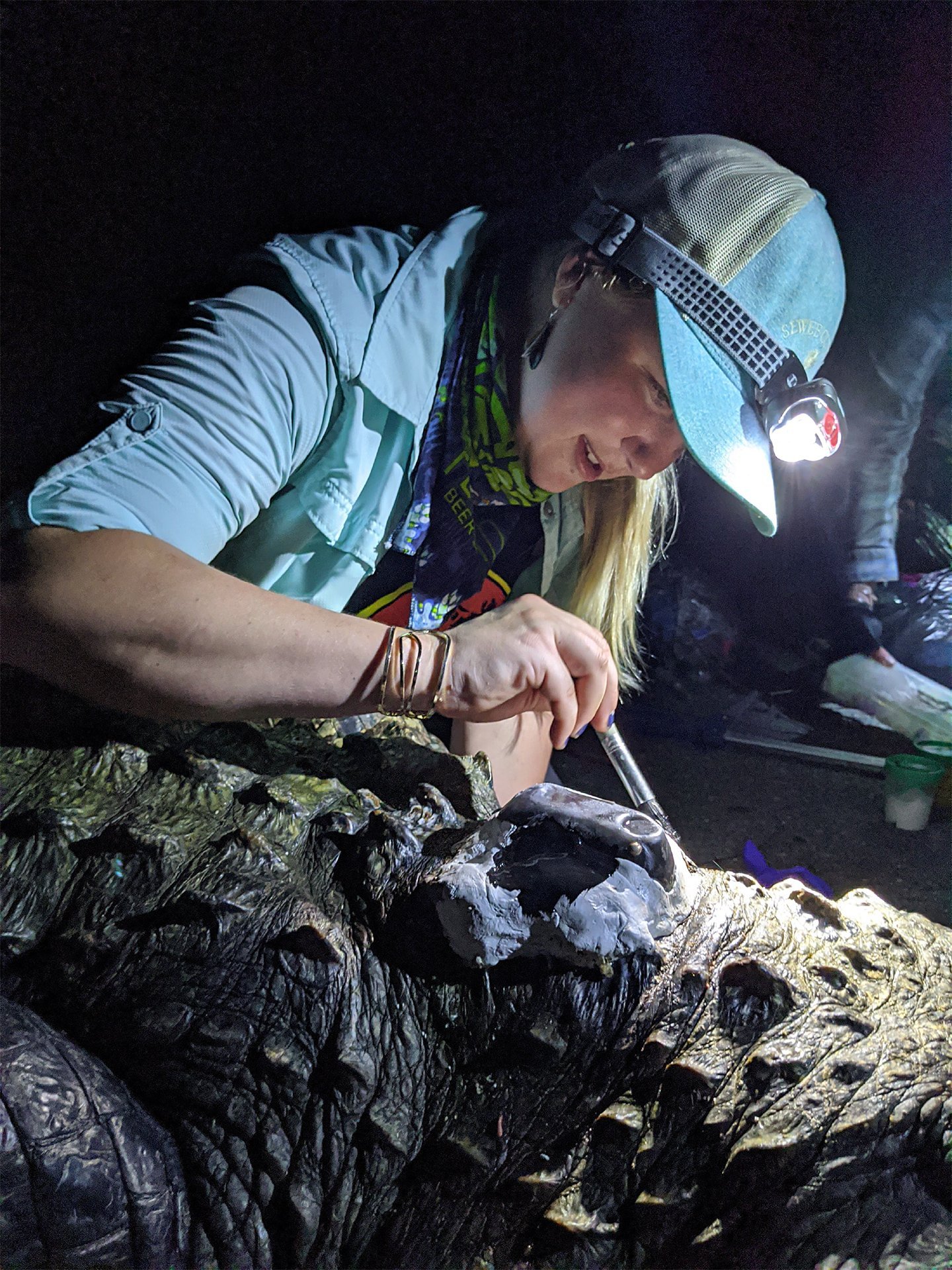 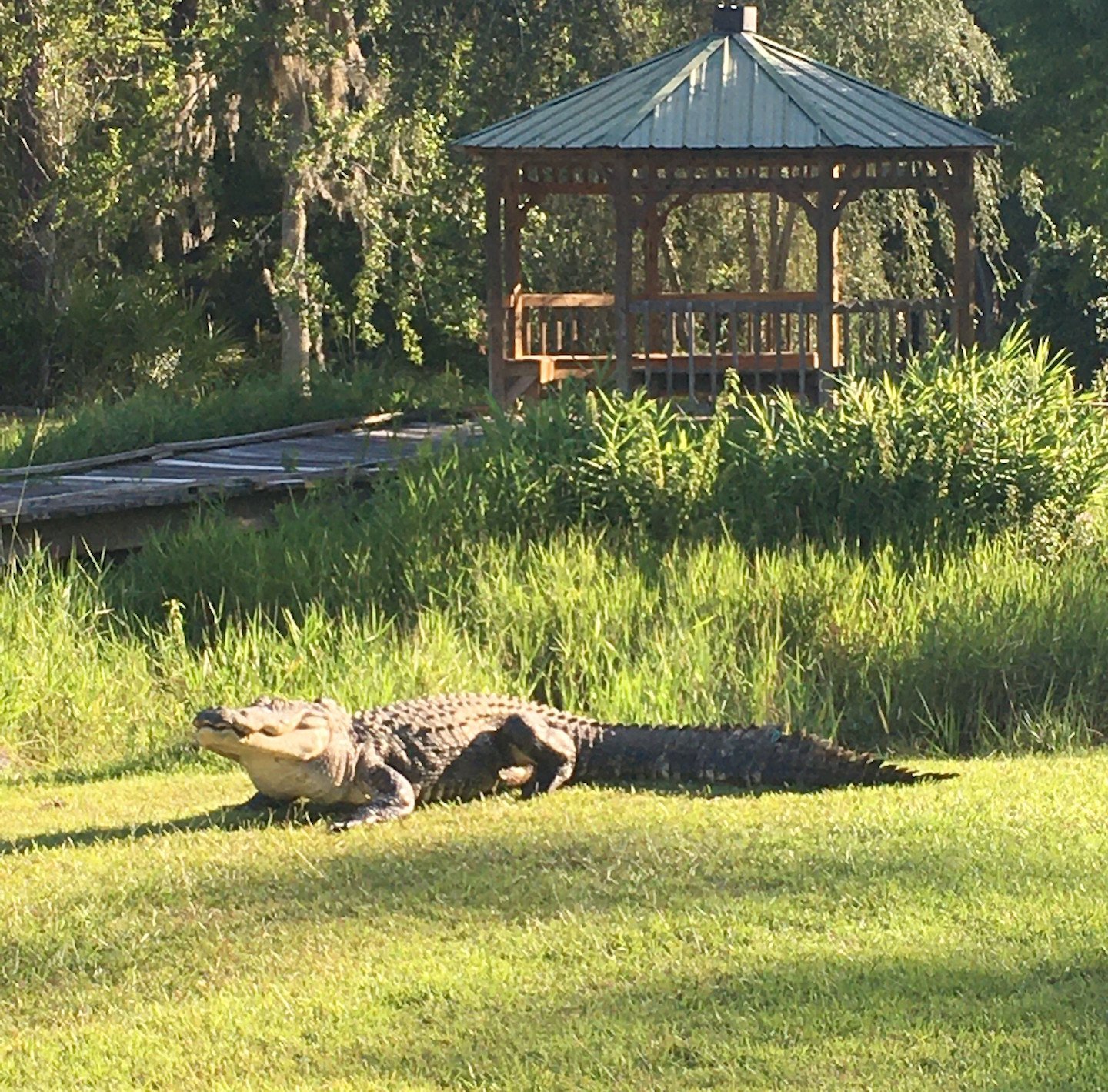 This map shows the 13 months (June 2020-July 2021) that Okefenokee Joe has had his satellite tag attached. As seen on the map Okefenokee Joe split his time between the front of the park and out in the National Wildlife Refuge portion of Green River. Okefenokee Joe was a large adult male alligator who died of old age in July 2021.

As a large adult male that was dominant, Okefenokee Joe’s territory was expansive but as he grew older, he did not patrol it as often as he may have once. That being said he was still known to occasionally make large scale moves from the front of the park all the way to the National Wildlife portion of Green River. This map shows the largest of those moves which is over three miles and is the largest movement we have seen by any alligator within the swamp.

After Okefenokee Joe makes a large move, he will generally stay in one area for a while. This map shows a month’s worth of data where Okefenokee Joe does not leave Henrietta’s small pond. 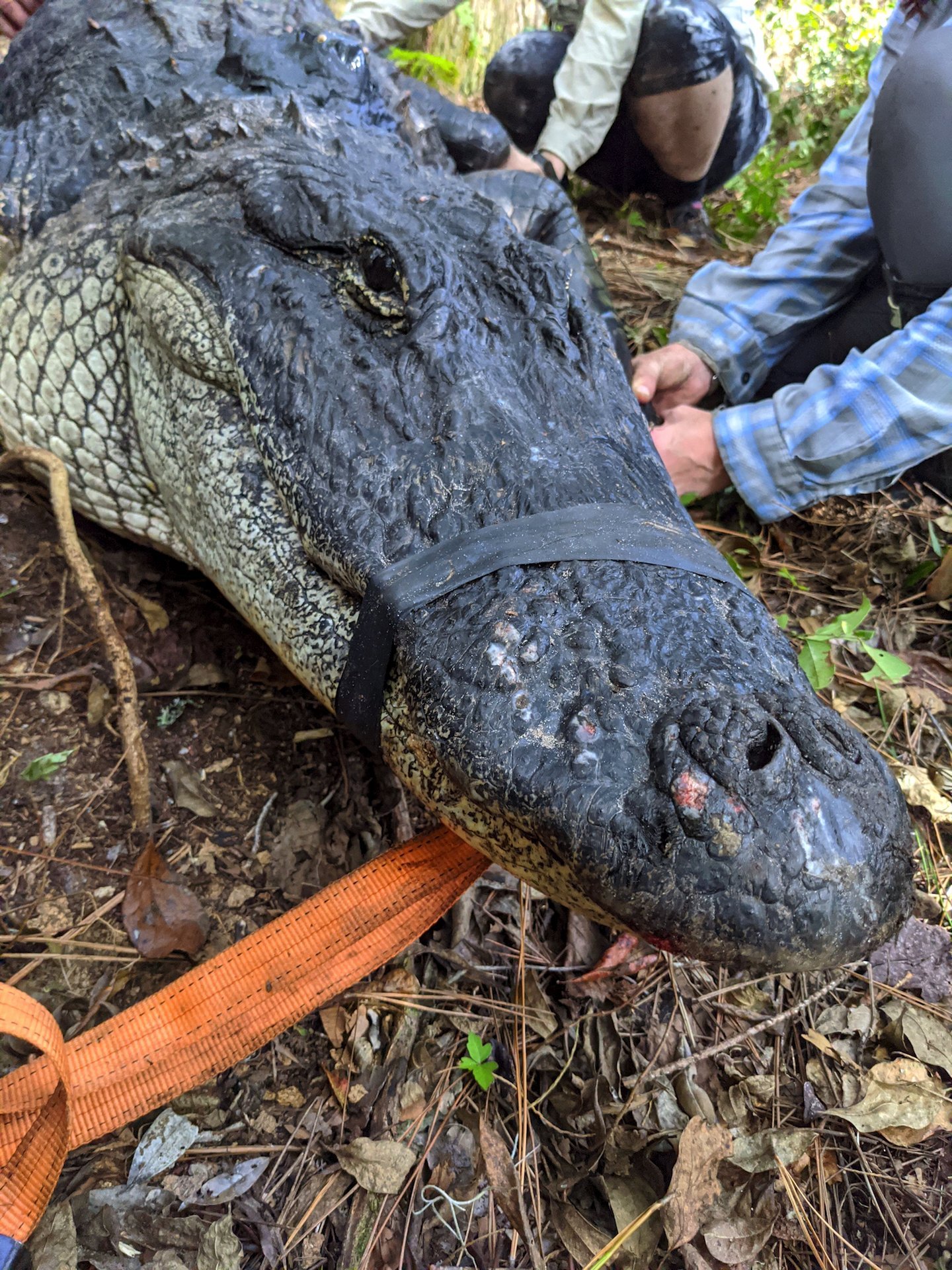 Click here to learn more about Obadiah Barber, see photos, and see where he’s been!

Description: Obadiah is an adult male American alligator. Obadiah is the second largest male alligator in our study at 11’ 1” and almost 400 lbs. Obadiah was a bit of an unusual capture for us as he technically captured himself. He had been seen wandering around the captive alligator enclosures at the park and then one day he was found inside one of the enclosures. Obadiah had climbed over the fence and into the enclosure with one of the captive alligators. We took this opportunity to put a satellite tag on him and then released him back into the swamp. Since his release, Obadiah has explored most, if not all, the front of the Park and has also gone back into Skull Lake. He is the first adult male alligator that we have observed in Skull Lake, which is Audrey Laine’s territory. It has also been observed that Obadiah and Okefenokee Joe have had territory disputes. This leads us to believe that Obadiah is establishing himself as the dominant male. Obadiah was named after Obadiah Barber, a man who set up a homestead in the swamp back in 1870. The homestead is located at the northern edge of the swamp in ware county Georgia and has been added to the National Register of Historic places. Aside from building a homestead, Obadiah was a great explorer of the swamp and earned himself the name “King of the Swamp”. To learn more about Obadiah, and his homestead click on the link. The Homestead | Obadiah’s Okefenok 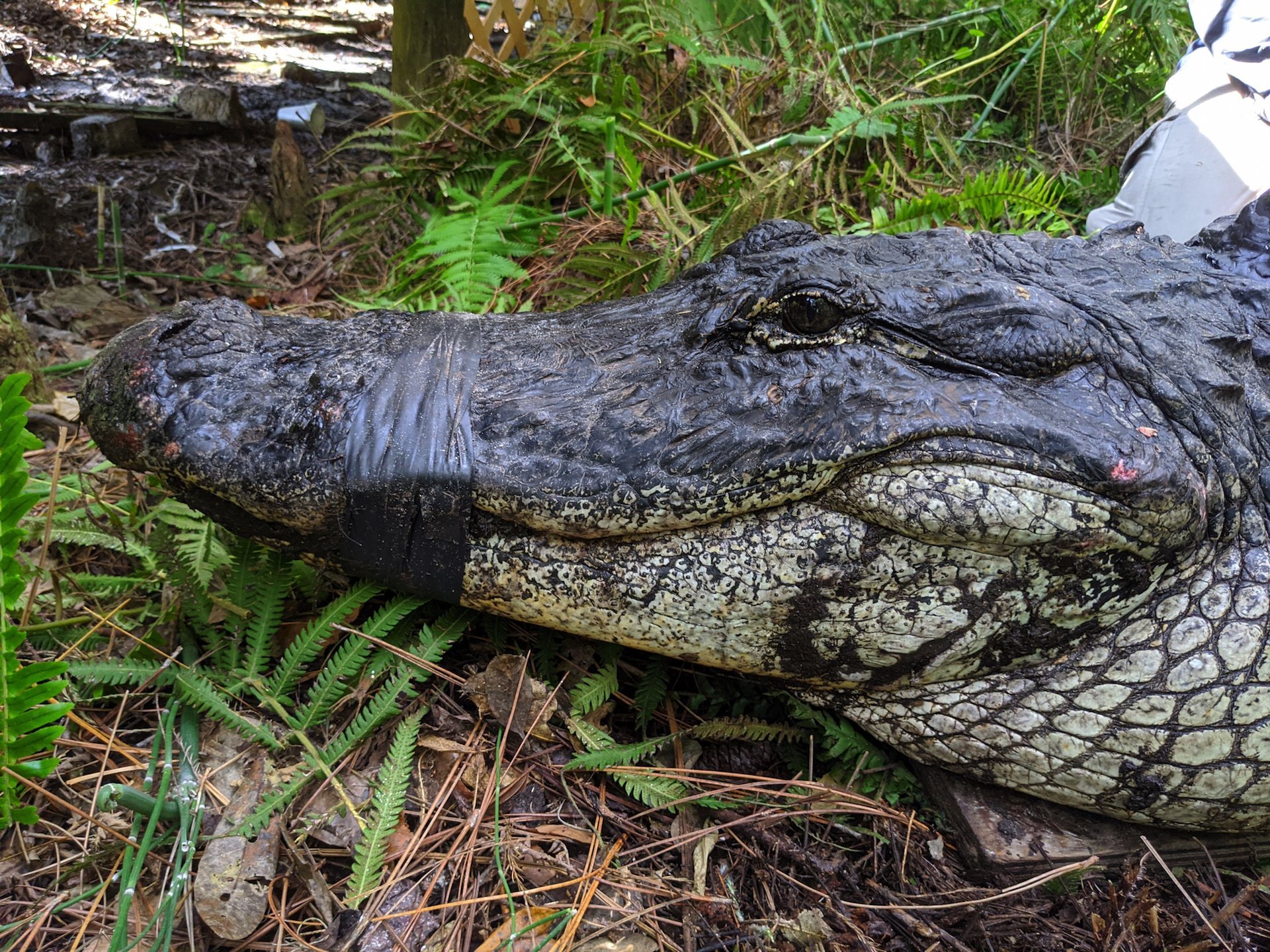 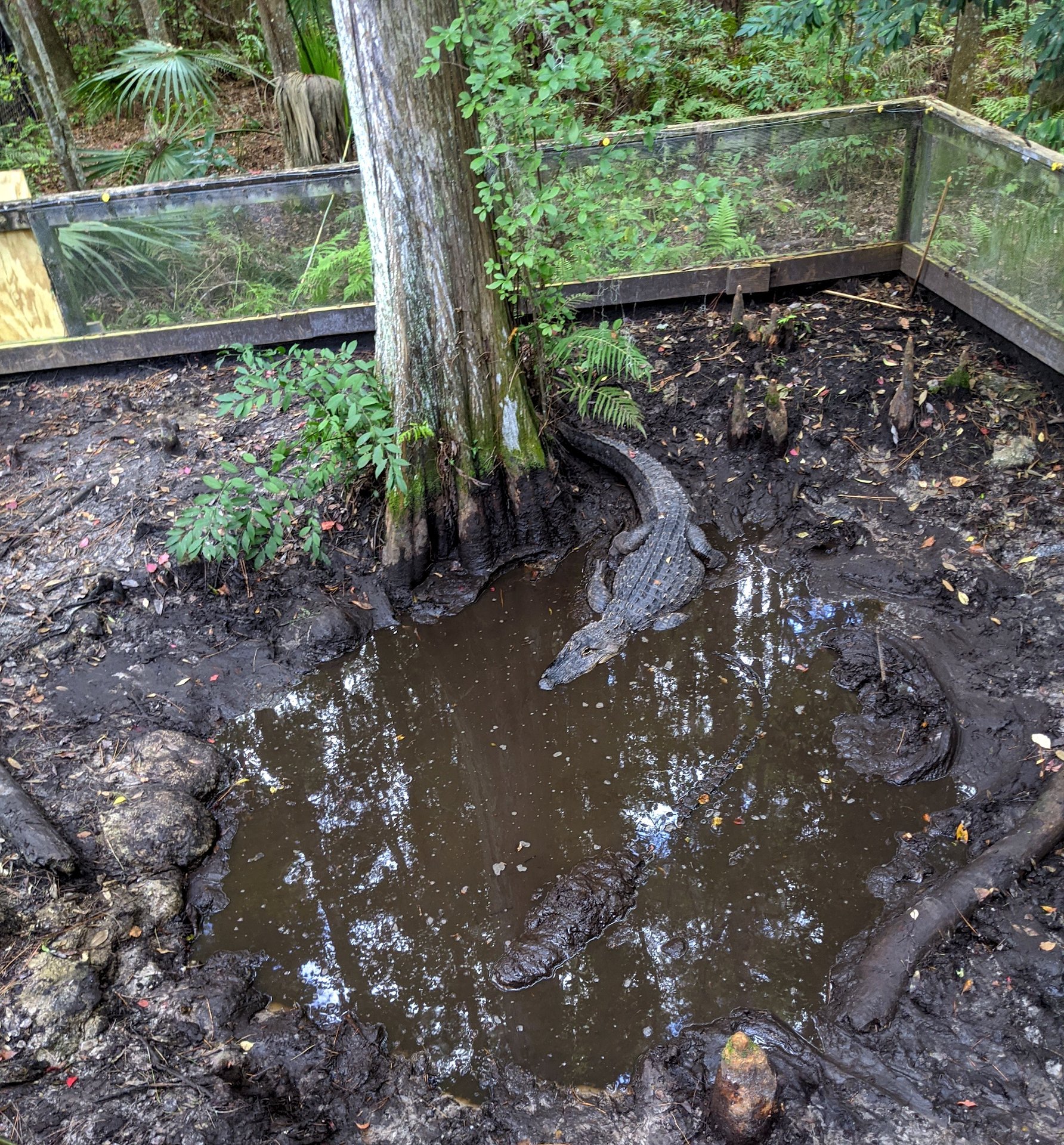 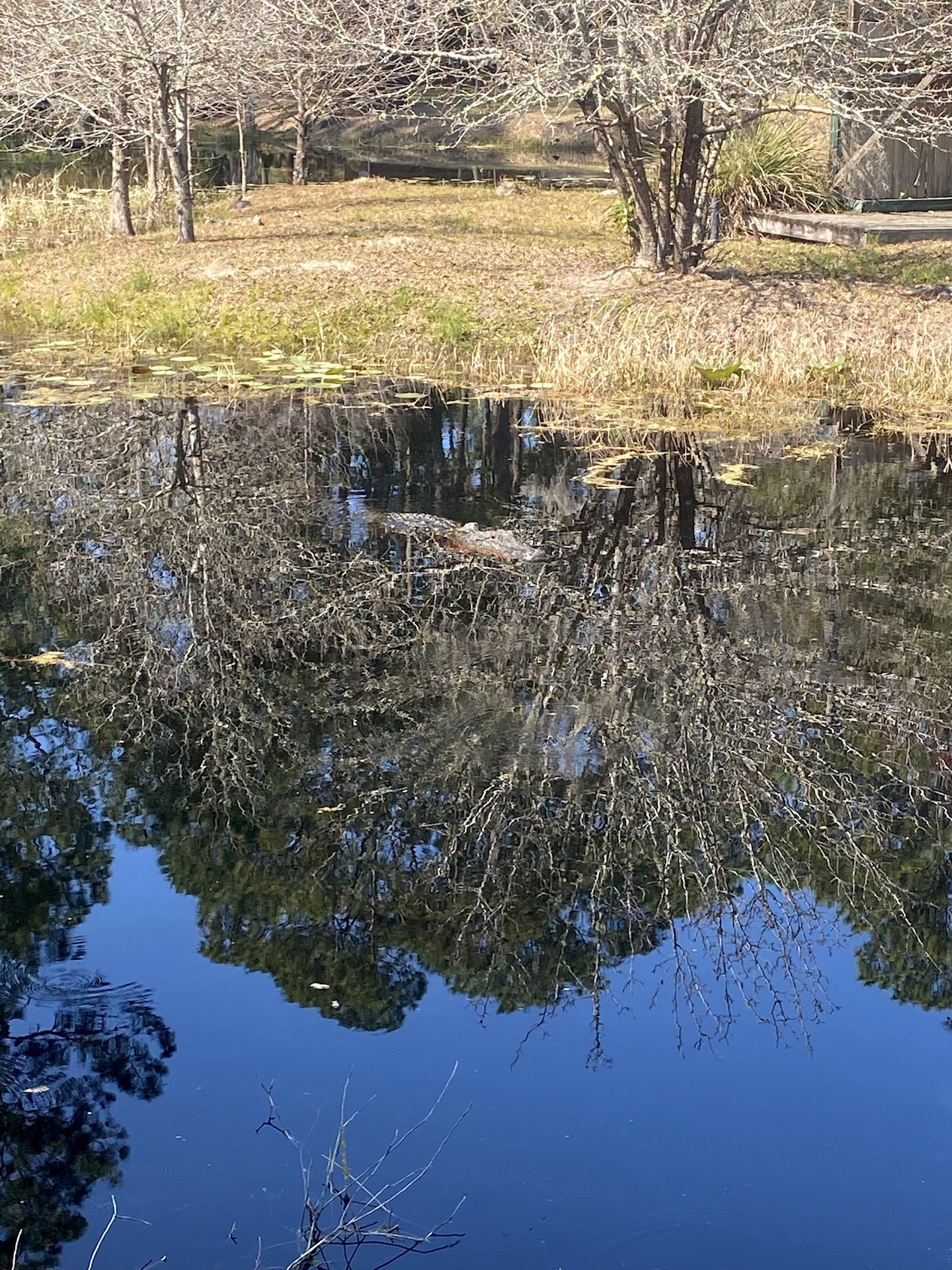 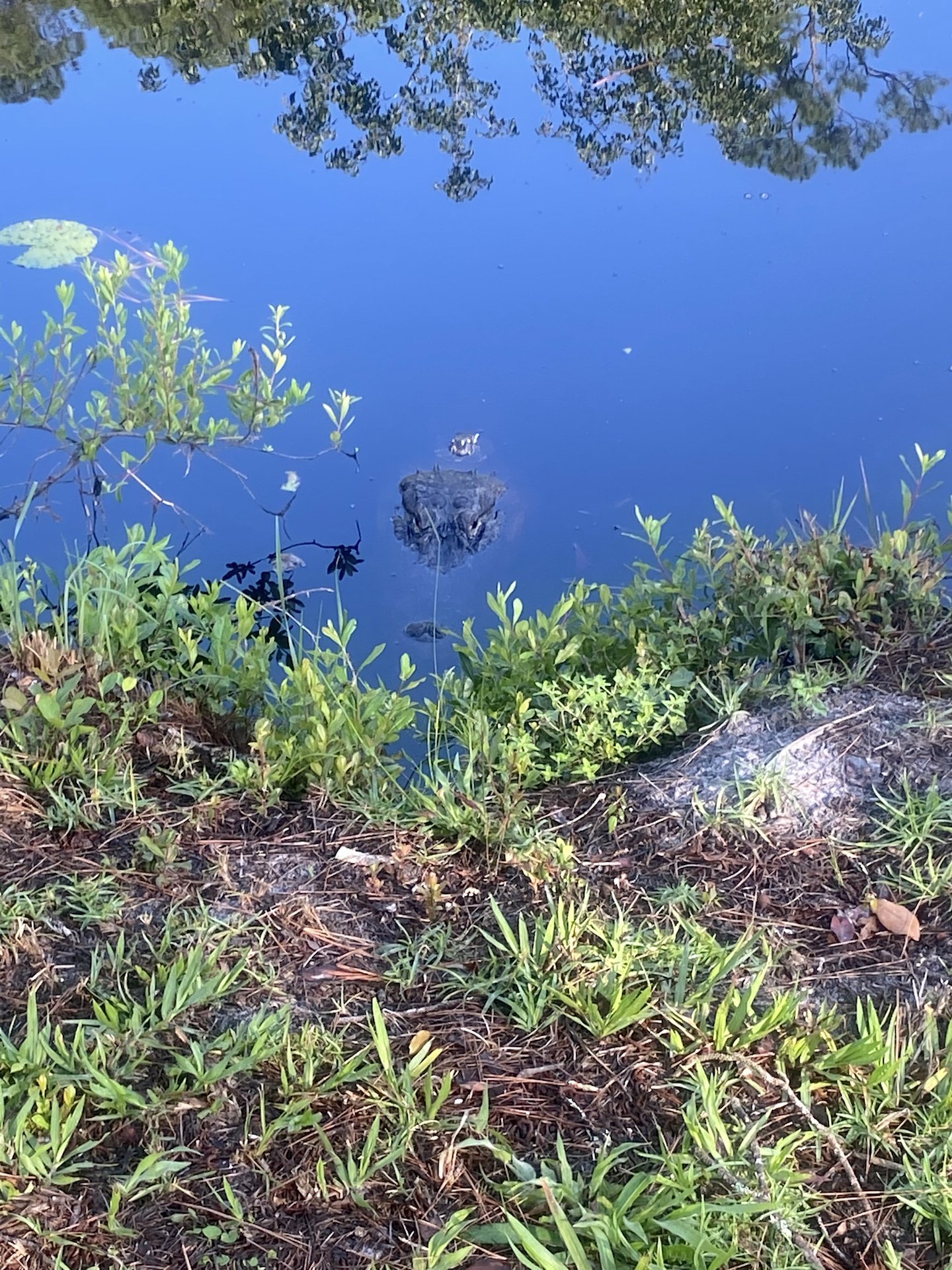 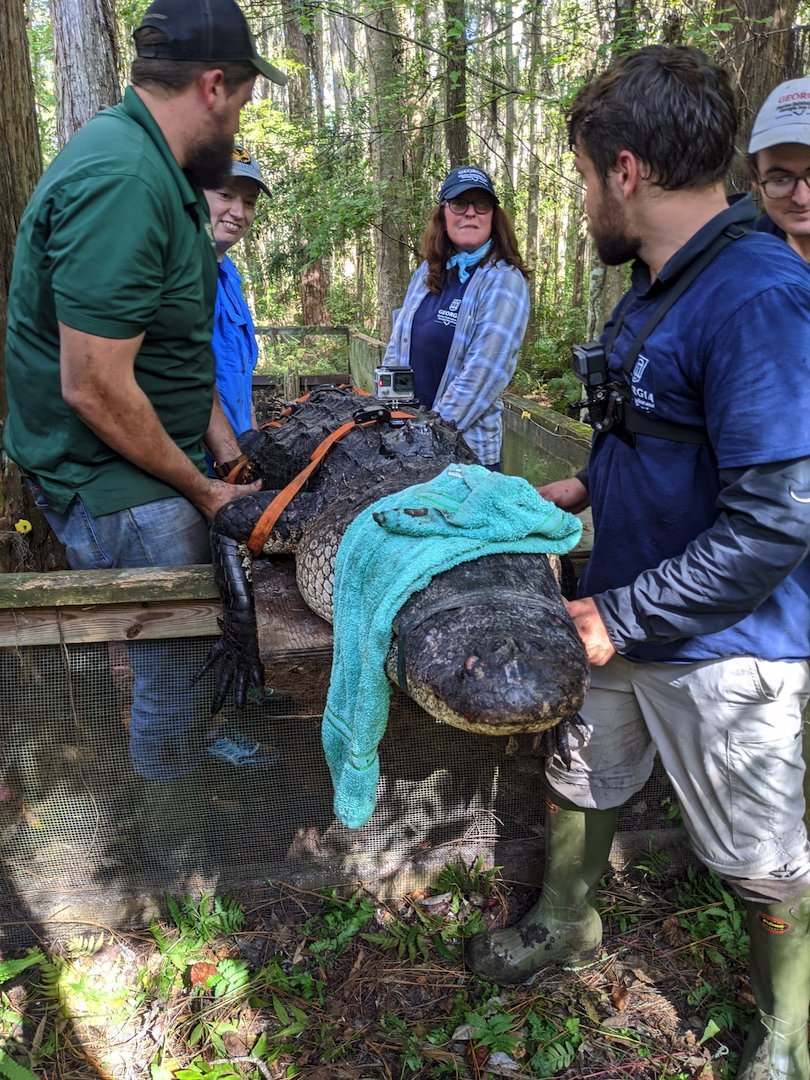 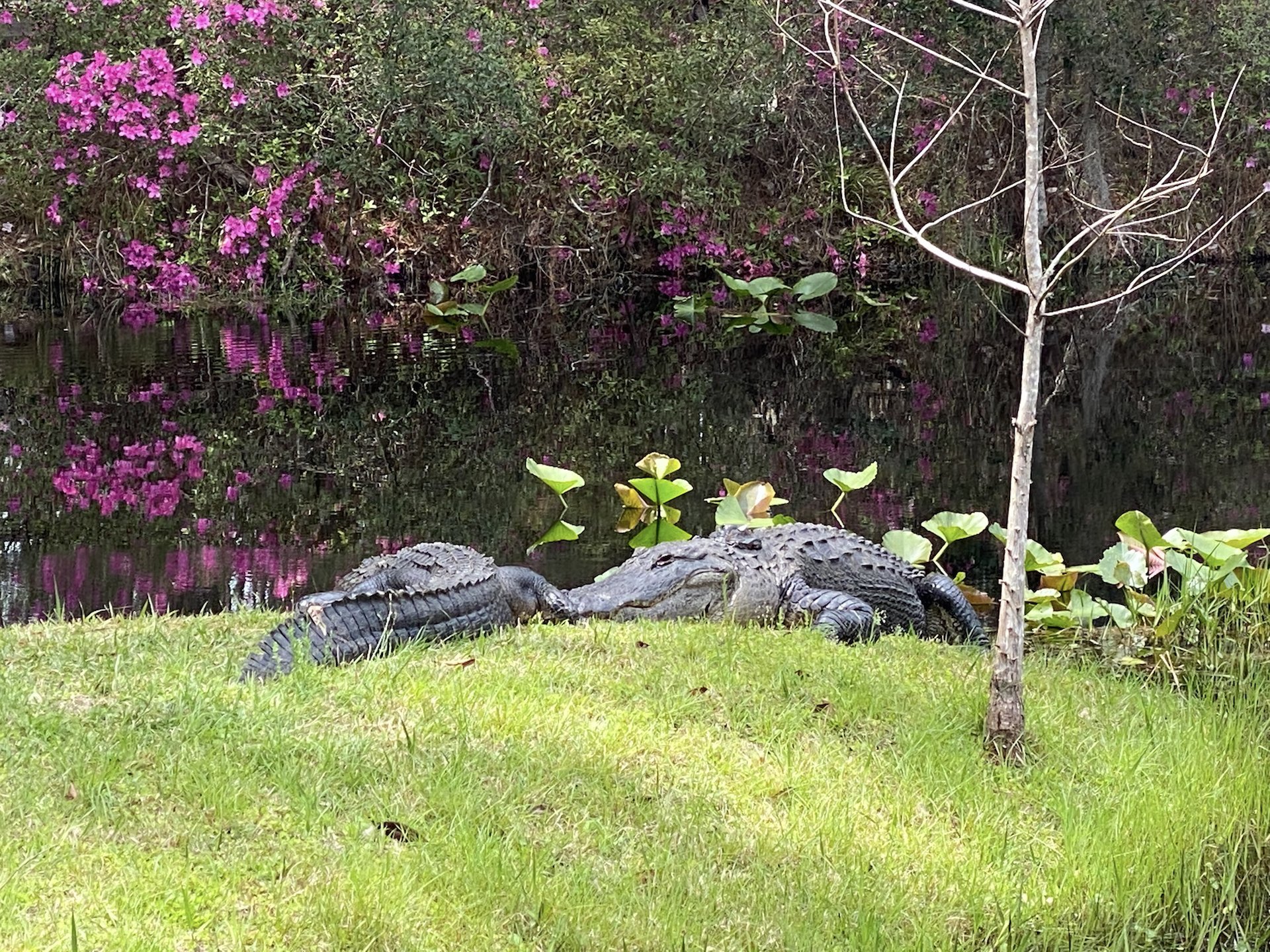 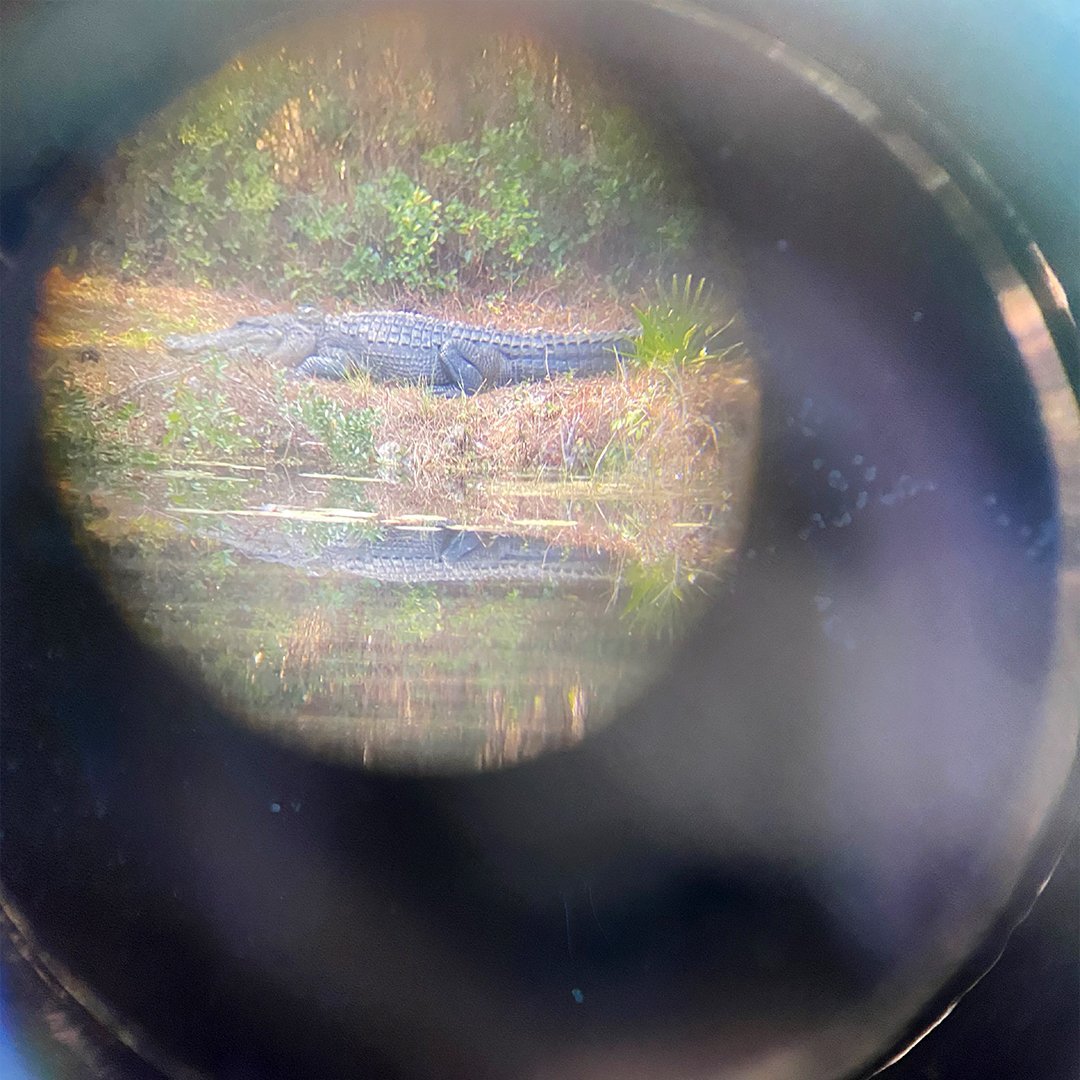 This map shows the overall movements of Obadiah Barber during the 20 months (October 2020 – June 2022) that he had a satellite tag attached. Obadiah visited almost every portion of the park itself; he spent most of his time at the front of the park around the gift shop, Pioneer Island, Oscars Pond, and the main boat trail. In addition to those areas, he also visited Skull Lake, Timucuan Trail and Grumpy’s Turnaround periodically. Based on his movements and the territory he occupies it seems that Obadiah is the dominant male of the Park.

During the Winter of 2020 Obadiah slowed down his movements as most alligators do. Except for a few trips to the front of the park he spent the winter at what we assume to be his den just to the northwest of Skull Lake.

As the dominant male Obadiah is very appealing to all of the females and he knows this. From March through May 2021 Obadiah was all over the park and visited every portion of his territory from Grumpy’s and Indian Trail to Pioneer Island and Oscars Pond. This map shows those widespread movements and how much a dominant male alligator moves during mating season. 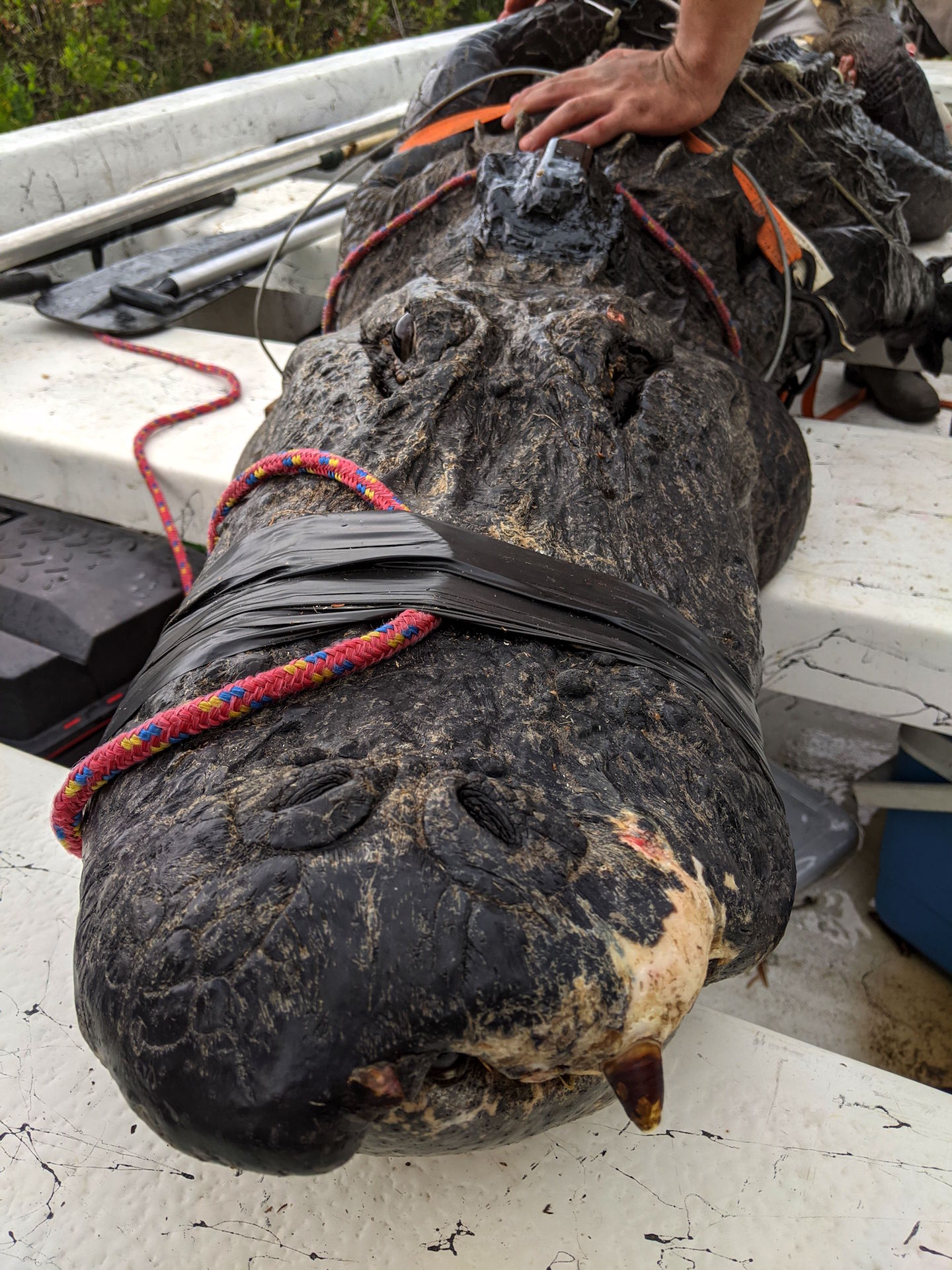 Click here to learn more about Doc, see photos, and see where he’s been!

Description: Doc is a large adult male American Alligator and is the third largest alligator to be incorporated into the satellite tag study. While he may not be the longest alligator in the study he does have the largest head. At 50cm long his head is actually several centimeters larger than Okefenokee Joe, the largest alligator in our study, who is several inches longer than Doc. Doc is a very old alligator that is evident by the worn misshapen scutes that cover his body and by his old injuries that have since healed over. He is missing part the front left of his snout and has one snaggletooth that sticks straight out of his upper jaw. He is also missing his left eye, which may have played a role in us being able to capture him, as we approached from his blind side. Despite his old age he appears to still have some fight left in him as he growled and hissed at us as we approached him. In addition to this we believe that he is still reproducing in his old age because of the numerous juvenile alligators that were also in Mud Lake. It remains to be seen how far his territory reaches but we imagine that it will be fairly expansive. Doc is named after two people; the first is Dr. Wilbur Hafford, the founder of the Okefenokee Swamp Park and the second is Dr. William Clark the man who brought us to the Swamp to research alligators. 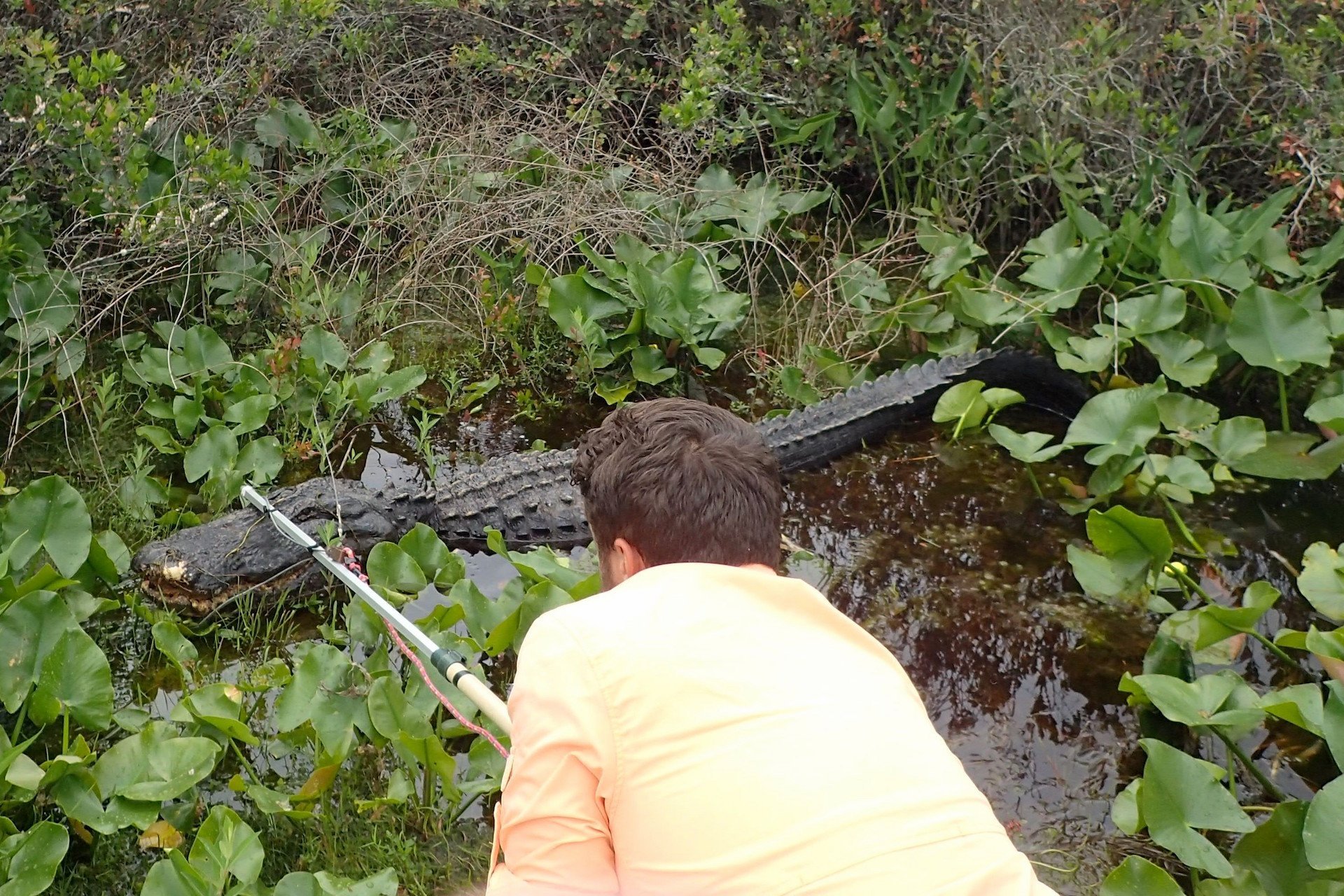 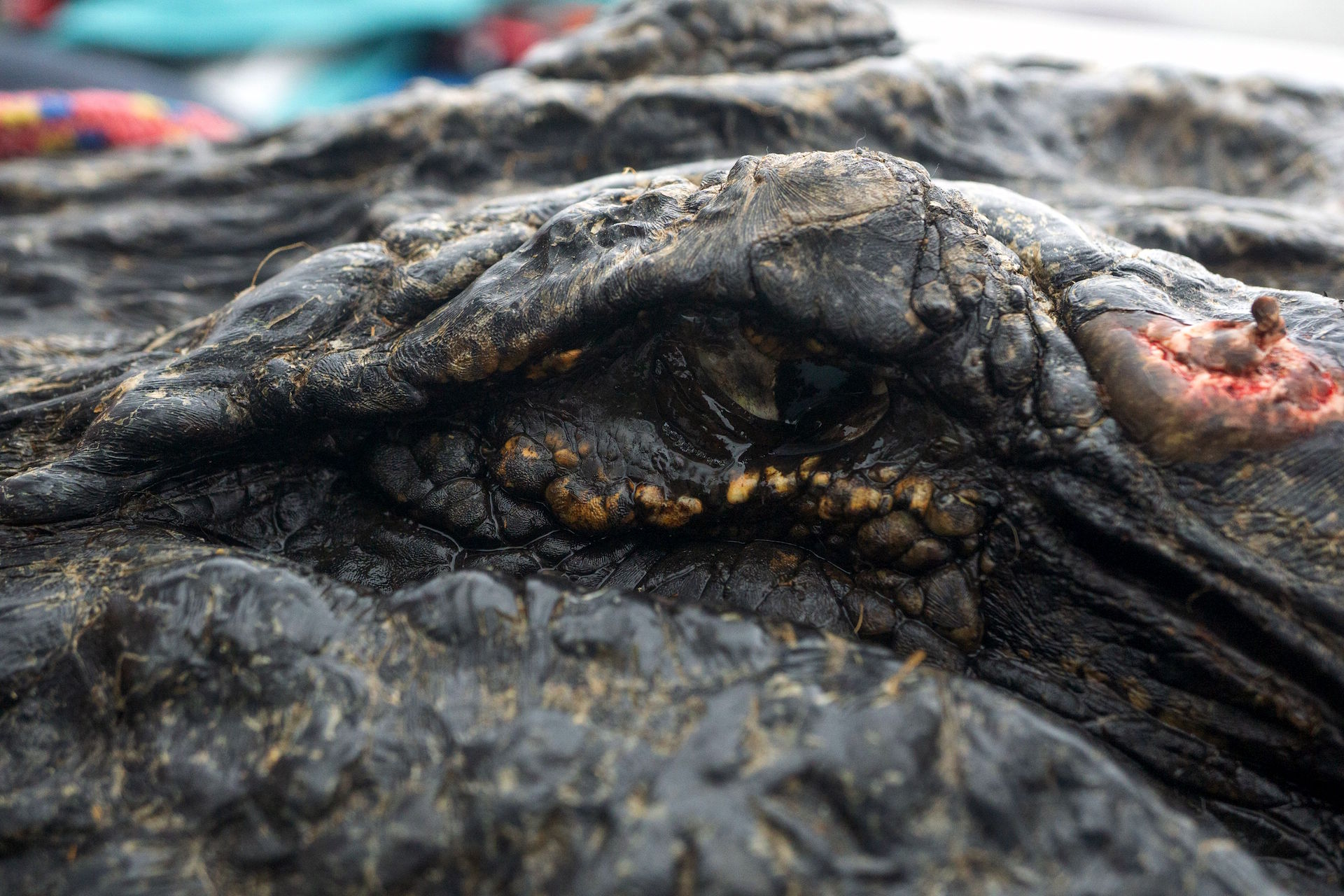 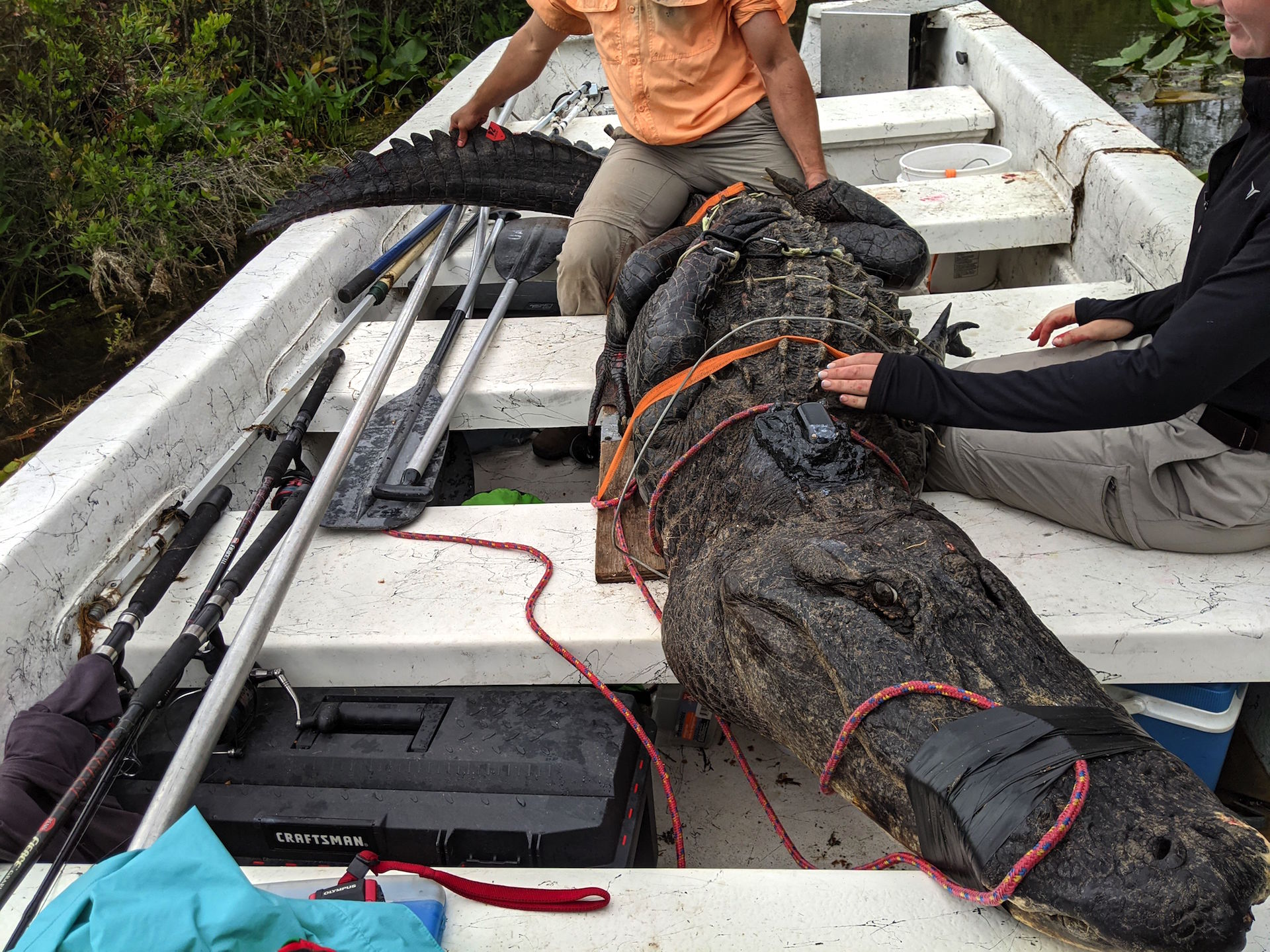 This map shows Doc’s movement during the 16 months (April 2021-current) that he has had a satellite tag attached. Doc appears to split his time between Mud Lake and an inaccessible portion of the Swamp to the south of Mud Lake. Recently, however, he made a journey to the front of the park and then traveled farther out into the refuge than we have seen him before. 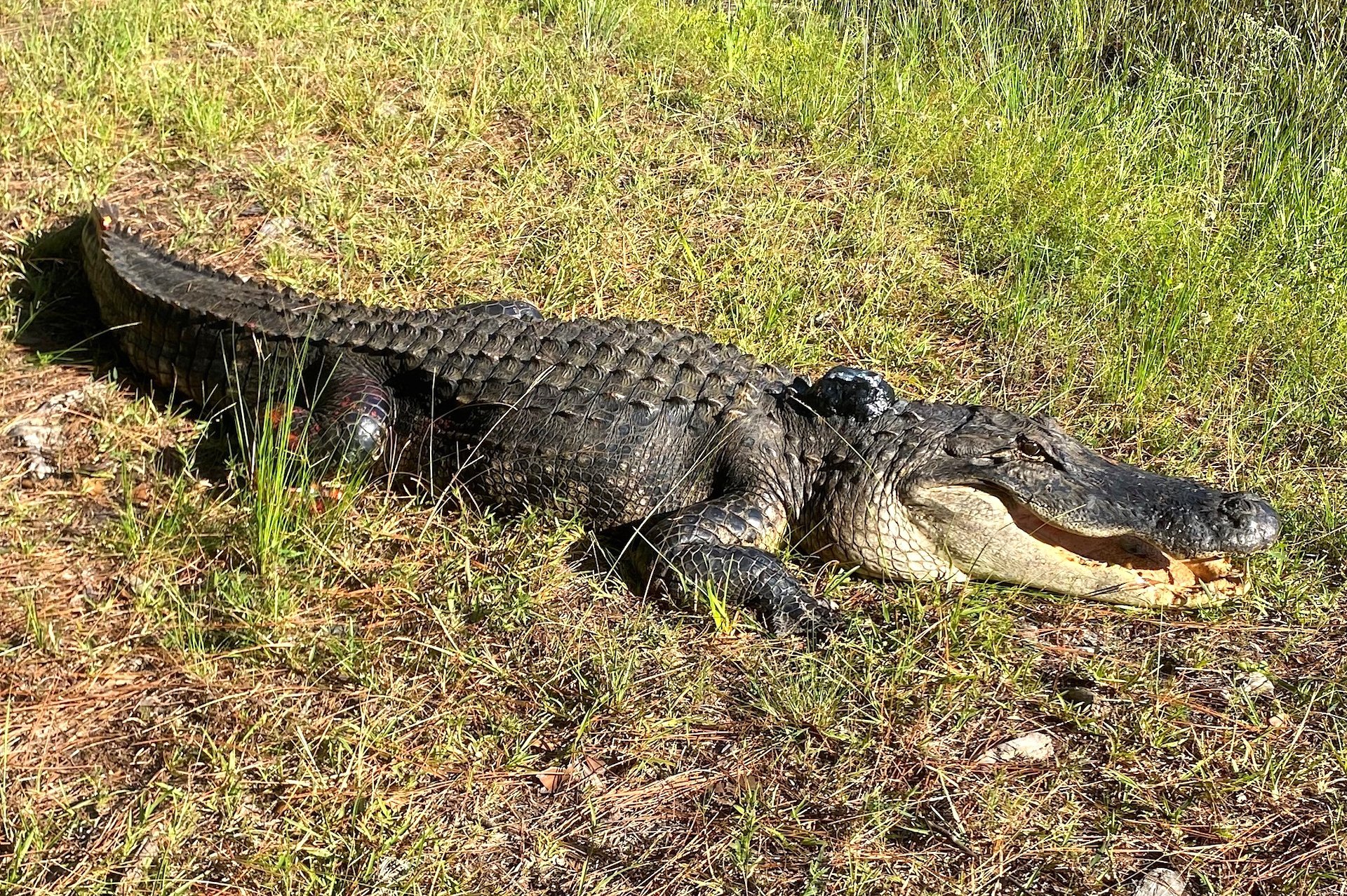 Click here to learn more about Rambo, see photos, and see where he's been!

Description: Rambo is an adult male American alligator living in the Okefenokee Swamp. Rambo is the 10th alligator to be incorporated into the satellite tag study at Okefenokee Swamp Park and the 14th overall! Rambo appears to be a younger adult alligator as he has virtually no injuries and very well defined osteoderms. Rambo only recently turned up at the Swamp Park and we believe that is because of the death of Okefenokee Joe. When an alligator vacates a territory in this case because of a death, another alligator will move in and claim the territory. Since we don’t believe that we had seen Rambo while Okefenokee Joe was alive it is likely that Rambo only felt comfortable moving in, in the absence of Okefenokee Joe. Rambo’s name was given to him before he was captured by the park staff and as a thank you for all that they have done to help us we decided to make it his official name! 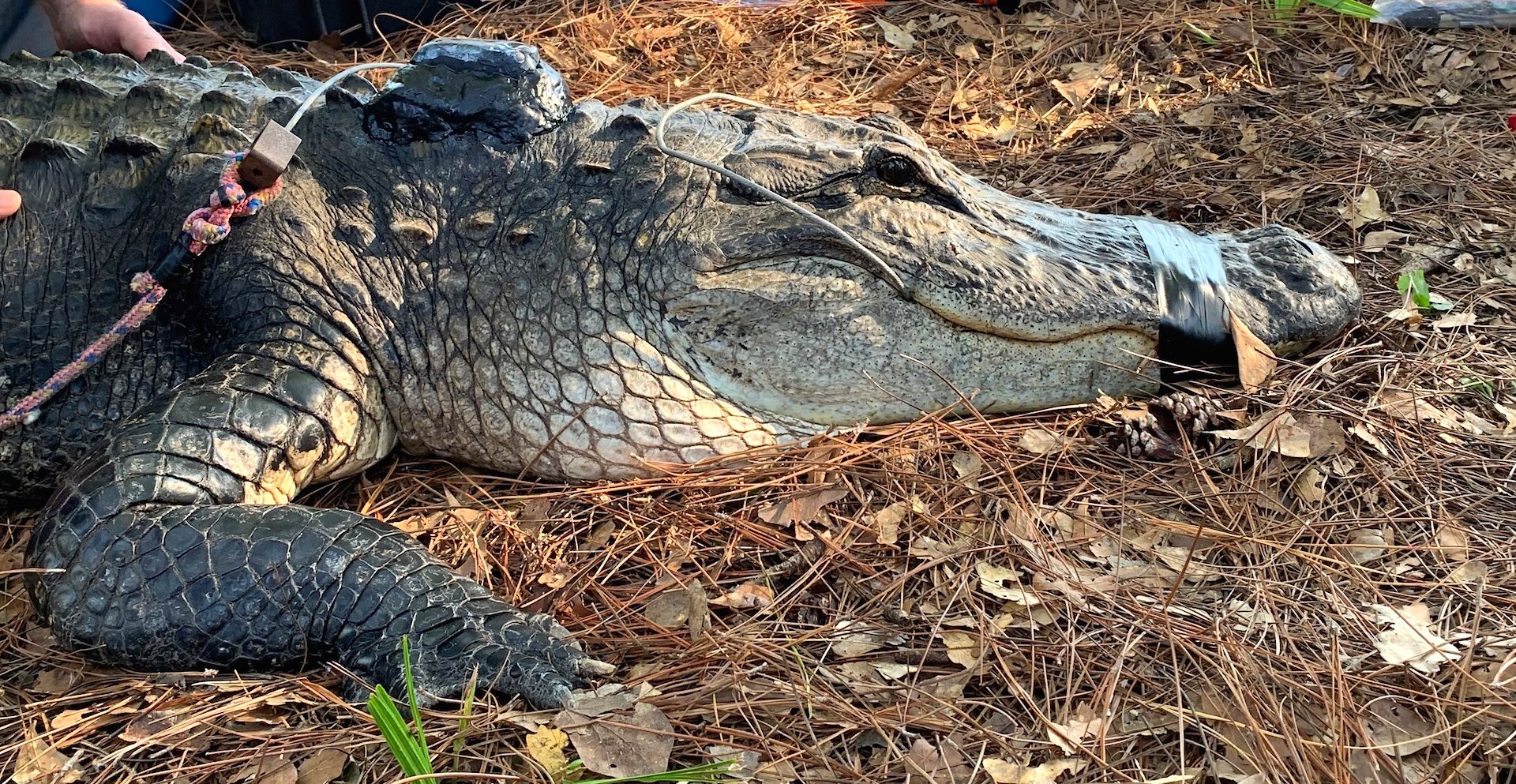 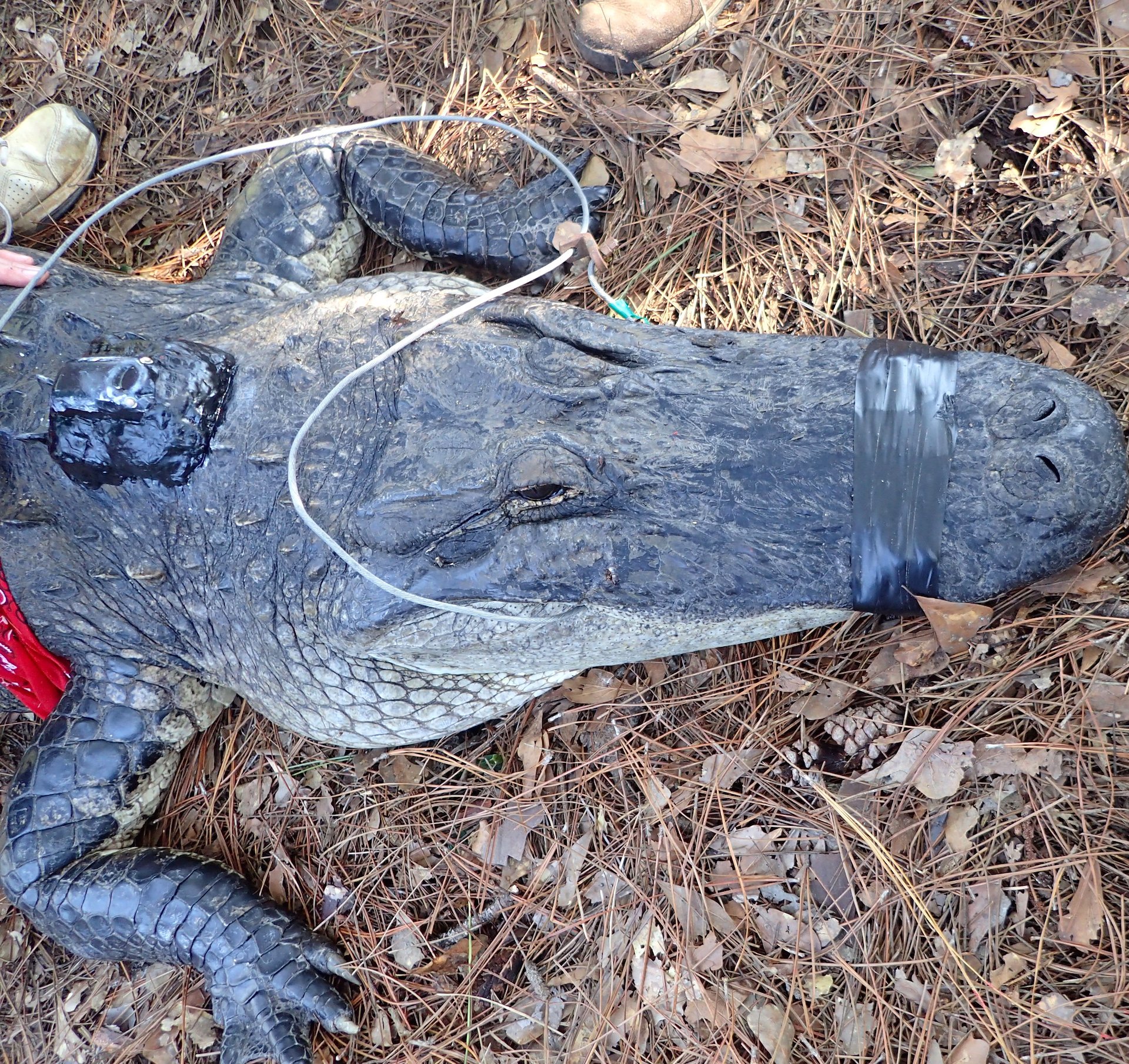 This map shows the movements of Rambo over the 12 months (September 2021 – Current) that he has had a satellite tag. After Rambo was captured near the entrance of Okefenokee Swamp Park he traveled 1.5 miles northwest and has not yet come back to the Park.

All photos by University of Georgia Marine Extension and Georgia Sea Grant, unless otherwise noted.

The OSPrey Society are very important friends of the OSP who generously invest in the organization to support the strategic plan, provide critical resources for needed projects and underwrite educational programs. All donations to the OSP help us to inspire our guests and community to conserve and protect our beloved Okefenokee. 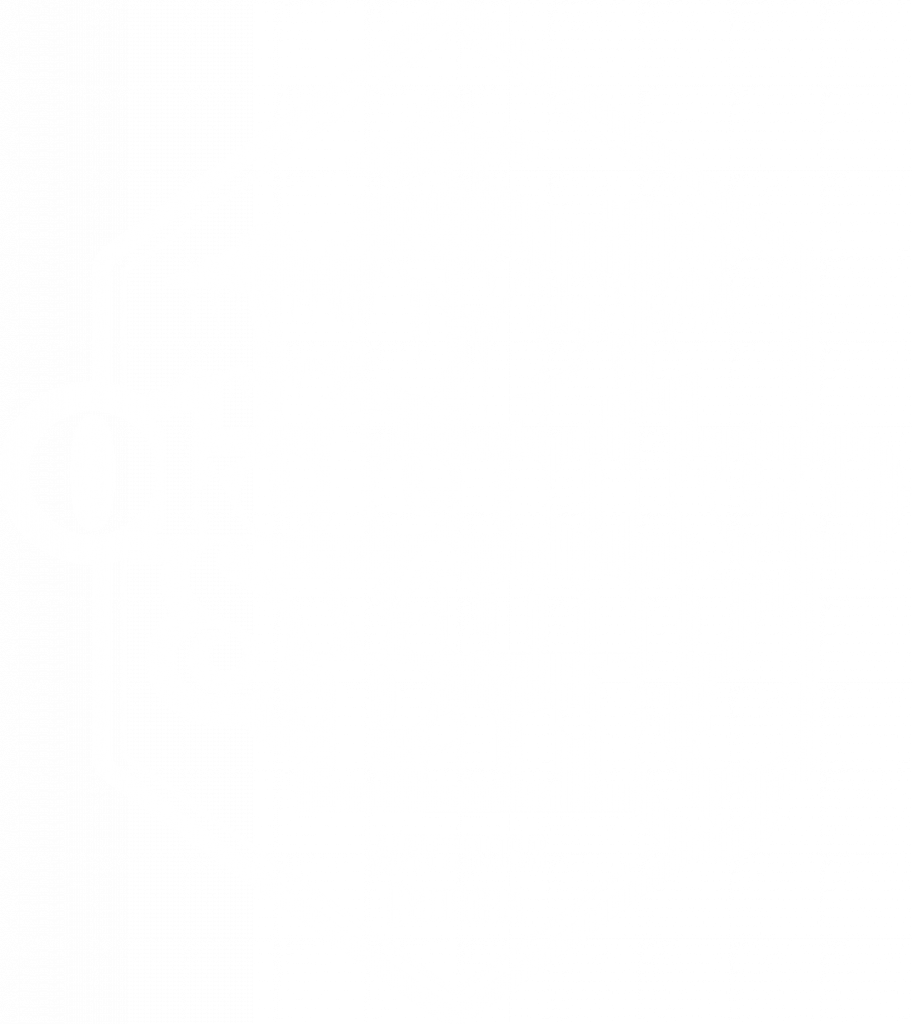 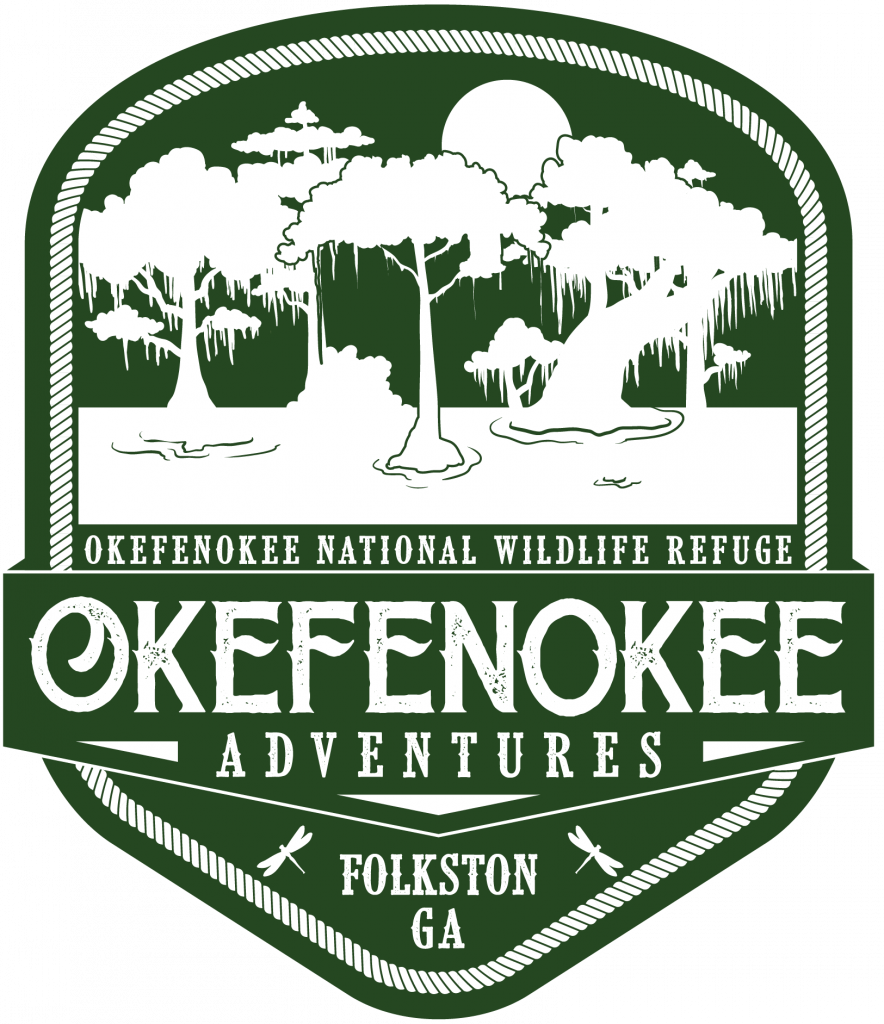 Our mission is to provide visitor access and interpretive education that inspires conservation advocacy for the Okefenokee Swamp.